The start of a new year is always a cause for celebration with Central Okanagan Crime Stoppers.

That’s because every January is recognized across Canada as Crime Stoppers Month.

There’s an additional cause for celebration in the Central Okanagan.   February 23rd 2021 marks 34 years that Crime Stoppers has been working with citizens, the RCMP and local media to fight crime across the region.

Since inception, Central Okanagan Crime Stoppers has racked up some pretty impressive numbers:

The biggest numbers though are in the estimated value of illegal drugs seized, stolen property recovered and proceeds of crime.

Our Crime Stoppers program works in collaboration with the RDCO, the RCMP, citizens, the media and a volunteer Board of Directors (Crime Stoppers Society). Our goal is safe homes and safe communities for all our residents and visitors.  We combat crime with key participation from engaged community members who can anonymously report tips that our team passes along to RCMP and other law enforcement agencies.  It is because of this community-based crime solving action that our citizens are helping the Police to help keep the Central Okanagan a safe place to live.

The Central Okanagan Crime Stoppers program is a member of British Columbia and Canada Crime Stoppers Association(s).  We link with our partner programs across the country to share information on reports of crime that impact communities across Canada.

We are also a member of Crime Stoppers International (CSI) which focuses on transnational crime, organized crime, Human Trafficking, Environmental Crime and the trade of illicit goods. 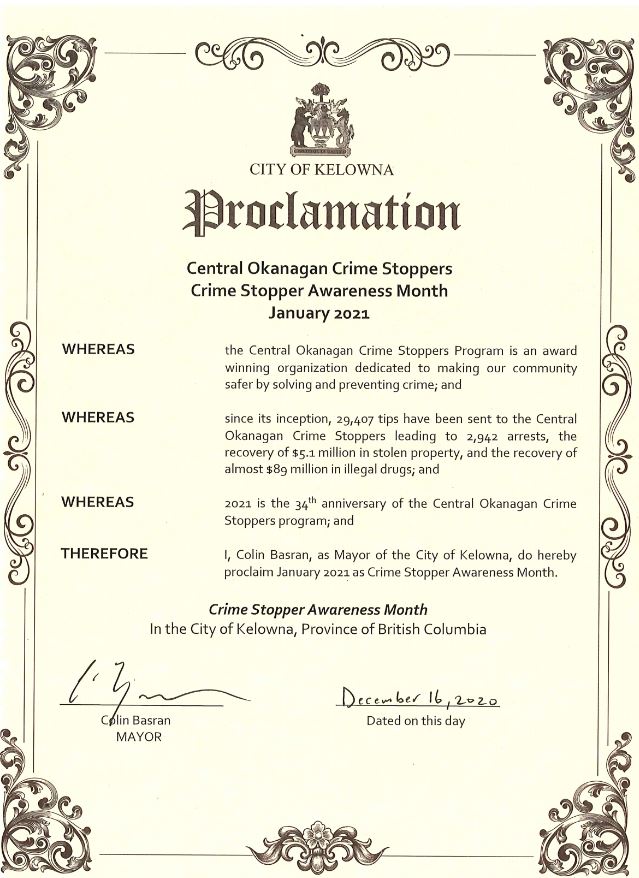