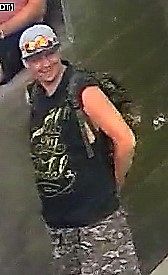 A tagger was reported to Kelowna RCMP on July 16th when a suspect was caught on camera defacing City of Kelowna property in multiple locations at City Park in downtown Kelowna.  The alleged graffiti artist is 21-25 years of age, wearing a black sleeveless shirt with “All My Vandals” written in gold on the front.  He was also wearing khaki camo shorts, black sliders, a white and blue baseball cap and sunglasses.  The City of Kelowna is in partnership with Central Okanagan Crime Stoppers with the “Turn in a Tagger” initiative that tries to eradicate nuisance graffiti.  A reward of $500 will be paid for tips that lead to the arrest of a graffiti suspect.