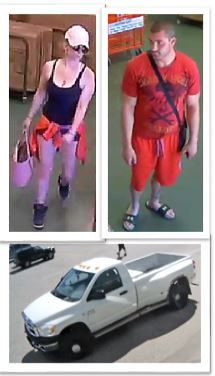 A couple rented a 10-ft long U-Haul box truck from a rental centre located in West Kelowna on July 26, 2019 using a false identity.  The fraud was discovered when the truck was not returned the next day and was later recovered as abandoned on September 13th in Chase.  RCMP are hoping to identify these alleged fraudsters who made the rental transaction.  The female is Caucasian, approximately 5’7” tall, 115 pounds with blonde hair wearing a beige baseball hat, black tank top, short black shorts with an orange jacket tied around her waist and black running shoes.  She carried a large pink purse and wore large dark sunglasses.  The Caucasian male is described as being 5’9”, 180 pounds and was wearing a red t-shirt, red shorts with grey or silver stripes, black Under Armour flip flops and a black cross-body bag.  They are possibly associated to a white Dodge Ram 1500 Cummins Diesel, single cab dually pickup with black rims, grey hubs, running boards and a white “tidy tank” in the box driven by a 3rd occupant.