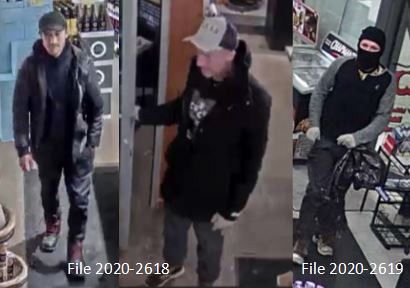 At 8:46 p.m. on January 14, 2020, staff from a liquor store on Banks Road in Kelowna called RCMP to report a theft of liquor.  Two Caucasian males entered the store and allegedly left with a bottle of scotch.  They were seen getting into an older silver/grey Toyota Tundra.  Seven minutes later RCMP responded to a robbery in progress at a gas station located just blocks away on the 300 block of Highway 33 West.  A male entered the store wearing a balaclava and flashed a knife at the clerk.  The suspect loaded up with cigarettes and left in a silver/grey Toyota Tundra with a silver bush bar on the front driven by an unidentified driver.  The next morning the truck, which turned out to be stolen, was found engulfed in flames on Raymer Avenue.  The first male was wearing a black jacket and hat with black boots with red laces.  The second male was wearing a black pea coat, a black and grey hat and a black Crooks and Castles shirt.  If you can identify these alleged thieves, whom police believe to be responsible for both files, please contact Kelowna RCMP or Crime Stoppers.