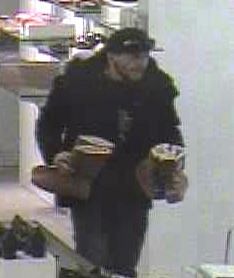 A loss prevention officer from the Bay located in Orchard Park Mall on Harvey Avenue called RCMP after chasing a shoplifter out of the store.   A male wearing a puffy black jacket with fur lining, blue jeans and khaki skate shoes entered the store at 3:50 p.m. on January 1, 2020.  The man headed directly to the women’s shoe department, selected two pair of Ugg Boots worth $500 before travelling straight to the exit.  When the officer called for the suspect to stop the male started running, dropping a pair of boots.  He then dropped the second pair before jumping in a waiting black Jeep Wrangler that immediately fled the area.