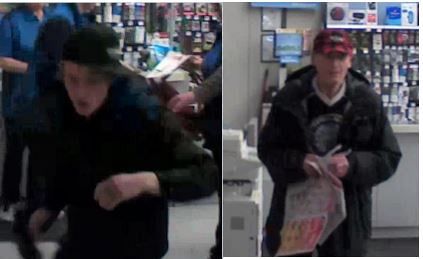 A local Lake Country drug store experienced some excitement on February 14 when they had a shoplifting incident occur at approximately 6:00 p.m.   Staff noticed a male wearing all black enter the store and go to the cosmetics section.  The clerk noticed the male unzip a backpack and place several bottles of packaged perfume in it and confronted him to stop when he left toward the exit.  Another staff member attempted to detain the alleged thief as he exited, resulting in a bit of a scuffle causing the alleged thief to drop a knife.  The suspect managed to leave without his bag that contained seven bottles of perfume.  Video surveillance shows the man entered the store with an accomplice, who also allegedly left without paying for a box of perfume two minutes after the first suspect fled.