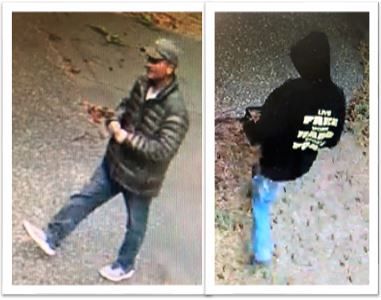 Lake Country RCMP members were contacted by an absent homeowner who watched as two men broke into his Carrs Landing home on the afternoon of March 7, 2020.  The men kicked in the front door and rummaged through the house for approximately 7 minutes.  One male is described as a Caucasian male in his 30’s or 40’s and was wearing a dark grey puffy jacket with blue jeans, a dark grey baseball hat, white shirt and white shoes.  The second male is wearing a black hoody with white lettering on the back and blue jeans.    It is unknown at this time what was taken, but if you can help to put a name to these two, we would like to hear it.