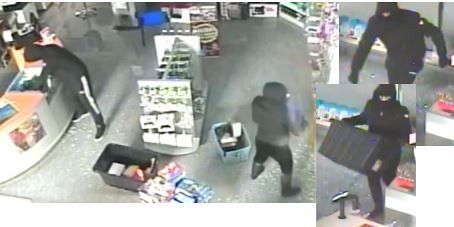 West Kelowna RCMP responded to a commercial break and enter at approximately 2:30 a.m. on February 19, 2020.  Two suspects entered a local drug store located on the 2400 block of Dobbin Road by throwing a cinderblock through the window.  Once inside, the two suspects headed directly to the electronics department where they smashed display cases and loaded up two grey plastic bins with various electronics.  The suspects were dressed in black with covered faces and gloves.  The suspects appear to be male and female, wearing the same type of coat with a triangle logo on the sleeve.