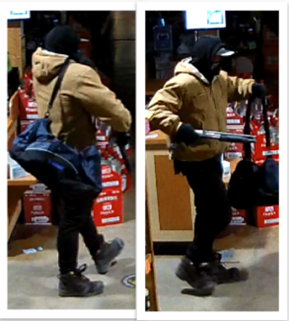 Lake Country RCMP members were called to the 9500 block of Main Street on February 24, 2022, after a masked male entered the local liquor store and committed an armed robbery.  The man entered the store just before 11 p.m., threatened the employees with a gun and left with cash and several bottles of high-end alcohol.  The suspect is said to be a Caucasian male in his mid 30’s, approximately 6’0” tall with a medium build.  He was wearing a Carhartt style hooded jacket with a black hoodie, black jeans, steel toed work boots, black gloves  and carrying a blue and black duffle bag.  Neither of the employees were injured.